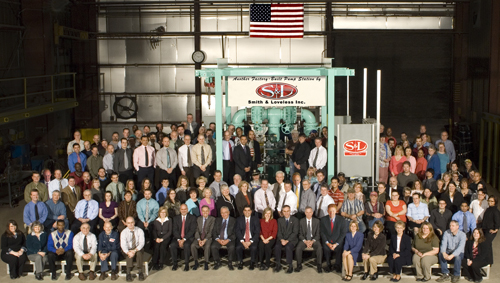 B. Alden Smith and Compere Loveless founded Smith & Loveless Inc. in 1946 as a sales engineering firm representing several manufacturers in the wastewater industry. Early in their association, Smith & Loveless recognized the opportunity for complete, factory-assembled pump stations. Their first three stations were built for the City of Salina, Kansas.  These units were fabricated in a converted barn less than three miles from the present world headquarters location.

As demand grew, Smith & Loveless built their first manufacturing plant – a modest structure a few miles from the present plant site.  Sales increased rapidly in the 1950s, and within a short time, Smith & Loveless maintained distribution throughout the United States and Canada. Because of this rapid growth, it was necessary to expand the manufacturing plant five times in a four-year period.

Smith & Loveless moved its present world headquarters and primary manufacturing facility to Lenexa, Kan., a Kansas City suburb in 1958. The present plant, which itself has been expanded several times, covers more than 100,000 square feet of manufacturing and office space.

In 1959, Smith & Loveless was acquired by conglomerate Union Tank Car of Lincolnshire, Ill (later known as Trans Union).  While the acquisition complemented markets served by other divisions of that firm, it marked a period when additional capital for expansion and research and development ensured Smith & Loveless’ leadership in the wastewater industry.

Following a 1981 Trans Union merger with the Marmon Group, the executive management of Smith & Loveless engineered a management buyout by purchasing the company’s assets.  Reborn as Smith & Loveless Inc., the newly privately held company renewed its commitment to maintain its role as a leader in the water industry. Its strategy was simple: design and manufacture quality equipment and provide superior service.

On the domestic front, Smith & Loveless Georgia Inc. was formed in 2000.  This allows the Company to provide superior pump station sales and service for its Georgia customers.

Ever growing and advancing, Smith & Loveless purchased the assets of the BIOMIXER Corporation of California in 2003 to obtain innovative aeration and mixing technology.  Then, in 2015, S&L acquired SCHLOSS Enineered Equipment, of Aurora, Colo.  The move further enhances S&L's full line of headworks and wastewater treatment equipment.

Smith & Loveless has actively engaged in R&D.  Smith & Loveless’ approach to research and development is both the search for new applications of existing product lines, as well as development of completely new concepts.  Through these efforts, Smith & Loveless has been able to enter previously untapped markets.  The company’s products are sold mainly through manufacturers’ sales representative companies, with more than 150 such contract companies located worldwide.