The main culprit causing regular pump clogs in the year-round resort community of Big Bear City, Ca. is one that is seen way too often at collection systems across the nation: consumer flushables.

“Nine times out of ten when we pulled a pump it would be clogged with rags, just clogged full of them,” said Andy Keller, Sewer Department Foreman, who estimated that the most problematic of the seven underground pump stations he operates was clogging as many as three to four times a week.

Located in the Southern California Mountains at 6,500 feet elevation, Big Bear City features a year-round resort that is a popular destination for fishing and boating in the summer, and skiing and snowboarding in the winter. Its collection system has more than 12,000 connections and employs eight certified wastewater operators.

Contributing to the clogging problem at the resort was a wildly fluctuating population, which was known to quadruple on many weekends. Pump clogs would often come one right after another, and because many were on the weekends this meant overtime hours paid to service workers. 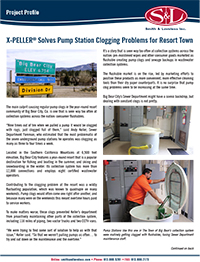 The solution was S&L's X-PELLER® Non-Clog Impeller.  To continue with this case study, please complete the form at right.